THE SCENE: Not as chilly as it could be.

F3 WELCOME & DISCLAIMER: Done and Done. Lots of chatter during this, mostly from the lawyer in the group.

Mosey to Everest and go up it

Mosey with wet shoes to the Coliseum

Stretching out the legs after (almost 3.4 miles) a lot of moseys

17 HIMs; 1 FNG; Welcome “Bag-Daddy,” a double respect HIM who also happens to be Blindside’s own dad!

Luke 13:8-9 … Parable of a fig tree not bearing fruit. 3 years without fruit? The owner of the vineyard wanted to cut it down, it was wasting space. The steward pleads by saying he will dig around it, fertilize it, and tend to it more. If we want the fruit of God’s presence in our lives, then we must continually choose to make our hearts a fruitful garden in which the virtues of God grow and are nourished in abundance.

Today is my birthday. I signed up for this Q several months ago when I learned that Birthday-Qs were a thing. It took me a while to remember that by performing a Birthday-Q, I would be publicizing my birthday. For most of my adult life, I have hated celebrating my birthday. I had several poor birthday experiences in a row during college and felt like it was always a burden on others like I didn’t want to be let down. I have gone so far as to ask my M to cancel a surprise party she was planning for me a couple of years ago because I didn’t want to celebrate.

What I have learned recently is that by acting this way, by acting like I don’t want to be celebrated, I am actually taking away others’ ability to celebrate me. I love celebrating others and I am taking that joy away from the people that mean the most to me in my life. I thought I was being humble and not a bother to those around me, but in actuality, I was being selfish and hurtful to my family, my friends, and all those in my life that care about me.

Partner Up, Grab your CMU

Each Team of 2 selects 1 or 2 exercises from following list:

Do set of exercise, then run as follows:

Mosey Back to stop sign at “Y”, do whatever set of 33 exercises you were doing at seabiscuit

Mosy Back to AO

Life is tough and full of unexpected challenges. We can be better prepared to face life’s challenges if we take control (the best we can) and make a plan. Of course, situations change and we may not follow our plan, but we are certainly better prepared when we do have a plan. Tonight my plan seemed simple (I had planned 18 laps plus mosey distance for everyone at a reasonable pace) to end up at 3.3 miles. I chose 33 because my late son Grady’s (F3 Quikrete) 33rd birthday was 10/17. We didn’t quite hit 3.3 miles but we got close. Situations usually never go as planned, but plans are invaluable.

Next we will go from Cone to Cone along the road that semi-circles around the Admin Bldg.  We will do the following at each Cone:

Mosey to main roadway and approach Lyon’s Bend Gate.  Turn left on little road that is close to Power Bldg.  We will do split into teams of two and do Doras.  While partner runs to end of roadway, does one burpee and runs back the other partner does exercise.  Each team will complete the following exercises:

Mosey to Area 51.  Then, we will run up hill to roadway where it turns toward Admin Bldg.  First arriving do Baby Crunches until everyone is there.

Mosey to Bat Feeder. Line up on street and sprint back to parking lot. Then go to AO.

James 1:17
Every good thing given and every perfect gift is from above, coming down from the Father of lights, with whom there is no variation or shifting shadow.

For those of you who read the bible, have you noticed how many lines, particularly in the Psalms, are repeated again and again.  A fellow in my church, Britton Sharp, who does quite a bit of religious study, informed me that one reason why followers often repeated lines was that they felt they should repeat it until they believed it.  They recognized that humans, unlike God, are fickle creatures, subject to whim and inconsistency.  We may believe something one moment and change the next day.  For us humans, our beliefs, our faith, our love is subject to change.  This can particularly happen during difficult times.

Almost every parent has heard their children say at some time in their life, “I hate you.”  Good parents know that is not the case.  Their child may be upset and angry at them.  In that moment they may hate their parents.  But deep down they still love them.  They still need them.  And, over time, when they have had time to cool off or when things settle down, their faith and belief in their parent is restored.

I am a Christian.  But my faith in God, unfortunately, can vary.  This is true for all Christians.  Look at Christ’s disciples.  When Christ was taken to be executed, all of his disciples ran, they lost faith.  Even Peter, who said he would never turn against Christ, denied him three times when he was being hung on the cross.  Knowing that our beliefs are subject to change, knowing the fickle creatures we are, I think it is a good idea to repeat verses again and again.  On some days we will believe them more than others.

I encourage you, this week, to find a bible verse and commit it to memory.  Say it again and again during your days of the week.  A bible verse I want to repeat this week is from Psalm 121:

From where does my help come?
My help comes from the Lord,
who made heaven and earth.

My belief in that verse will likely vary during the week.  But, the idea is to repeat it until I believe it.

MOLESKIN:
Prayer for Junk’s wife who is going for check up one year after cancer treatment. Prayer of praise for Emoji getting his CPA license today and for Pele who was able to workout today after injuring his knee on Monday at softball.

Second round of SSH – IC

THA-THANG:
Under cover in the shelter at the bottom lot

God makes the seasons change in our physical world and also in our lives. Most of the time we have little influence on when a season changes and what that season will be. We have to accept that fact that we are in a new season. Fighting to not change is futile. For example, personally, with aging, we transition slowly into a different season, but once you realize you have changed seasons, you have accept the fact you cannot do the things you used to. I can do my best to stay fit, but getting upset about not having the capabilities I used to is pointless. Sometimes you have to modify- but that’s ok. Other season changes are abrupt like the loss of a loved one or a sudden job change (like getting laid off). Raising children and the various transitions is another set of seasons that can be challenging. Losing control of the children is another tough one we have to accept or we will cause more harm. This is God’s plan and we cannot change it.

Before we begin let’s get a few things out of the way:

(Mosey around to the right to the Long Curve)

“Do for a few, what you wish you could do for many.” — John Maxwell

What did Jesus do? He did for a few what he was going to do for many.

Here’s the deal with this picture below. I walked into Starbucks this morning to get my coffee on the way to work, and they had this little board up on a table, with sticky notes covering all of it. On these sticky notes were encouraging words, mantras, and more — based on the directions for people to write down something encouraging, positive, uplifting, and unique on a sticky note and post it on the board, to spread positivity throughout people’s day. Here’s the cool thing, and surprising thing for me actually — there were more mentions of Jesus, God, and Bible verses on this board that I thought. They actually outweighed everything else pretty much. So as I waited for my coffee, I wrote down one of my favorites, “Keep the Faith & Fight the Good Fight” and stuck it on there.

That reminded me of the John Maxwell quote. For me personally, sometimes I have all these big ideas that I want to start and implement and create for people all over, but then I see these sticky notes and it so quickly reminded me of “Do for a few, what you wish you could do for many.” The people that are immediately around me (family, friends, co-workers, etc), am I serving them well? So the question I must ask myself, and I believe we as HIM must ask ourselves is “what can I do for a few, that I wish i could do for many?”

And men, sometimes it’s as simple as putting a positive, encouraging, and uplifting message, verse, phrase, mantra on a sticky note. But what good does this sticky note (now with this powerful message on it) do if it is not shared and spread? So the Asylum PM men and I were discussing this tonight and I gave them this challenge: take this sticky note idea and implement it in your life this week. Write a personal favorite verse, encouraging word, positive phrase or mantra on a sticky note and give/share it with someone. You’ll be amazed at what something just as small as this can do for a few, to affect and serve the many.

Let’s take this a step further. I want to hear from you. Other men in our PAX want (and need) to hear from you as well. Across different AOs and parts of our city and region. So not only are we externalizing this, but we’re internalizing it for F3 Knoxville as well. Check out a new channel on slack called #sticky-note-encouragement. This channel will be created to allow the men of our region to do this. We all need encouragement, and sometimes it’s as easy as putting it on a sticky note and sharing it. #ISI 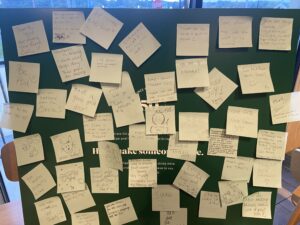