THE SCENE: Temps in high 50’s, clear, breezy
F3 WELCOME & DISCLAIMER
WARM-O-RAMA:
10 Pinto About-Face Twists each way, 20 Side Straddle Hops, 10 Plank Jacks, 5 Baby Arm Circles forward and backward, 5 Wide Arm Circles forward and backward, 10 Cherry Pickers
THA-THANG:
Mosey to northern parking lot of park.  We will do Route 66 along the sidewalk that heads to park entrance at Lyon’s Bend.  We will run back to the start after each exercise.  These will be the exercises:

After these exercises we will alternate between Bernies, Lunges and Sprints along each light until we get to street that extends from entrance gate.

Mosey up street towards AO but stop at stop sign at intersection of road coming from Admin Bldg.  On grassy area near stop sign we will do 20 Hello Dollies and 20 American Hammers.

Mosey to Northern Ball Field Entrance Parking Lot.  We will do the following from one end of parking lot to other and then do ten merkins after each run there and back:

MARY:
Box cutters and planks.
COUNT-OFF & NAME-O-RAMA
16 men, no FNG’s.
CIRCLE OF TRUST/BOM:
Proverbs 18: 24.  A man of many companions may come to ruin, but there is a friend who sticks closer than a brother.

Sometimes our self-doubts, our shame, our anxiety, or even our pride can keep us from turning to friends when we are hurt or in trouble.  As a psychologist, I often see individuals coping with hurtful issues that they are too embarrassed to speak to their friends about.  A young man in his twenties recently lost a job that he had out of state.  He has friends who are smart, energetic, and growth-pursuing and who appear to be going places with their lives.  He has come back to his home town and has a few of those “successful” friends who still live here in Knoxville.  He hasn’t even contacted them, too embarrassed to tell them about his loss of job.

If these guys are true friends, they are the very ones he should turn to at this difficult time.  If they are true friends, they will care for him and hold him up.  His true friends won’t begrudge him for losing a job. They like him for who he is, not the type of job he has.  Yes, back when he got the job they may have praised, pat him on the back, wished him well, told him he was going to “kick ass” at it.  They were saying that because they care for him and want the best for him.  They won’t turn their backs on him because he has stumbled.  They are going to want to pick him up, carry him.  If they don’t do that, what kind of friends are they?

I remember a troubled time I had in my early 20’s.  I was lost in terms of what I wanted to do with my life.  I had fumbled around in a few jobs and was working as a forklift driver at a warehouse just to earn enough money to buy groceries while I lived with my uncle who put me up.  I was depressed and certainly not my usual self.  I remember my friends hanging in there with me at that difficult time.  They would take me to rec centers to play basketball, take me out for meals, call me to shoot the breeze, – not necessarily ask about my job search or career struggles but just be there for me and certainly lend an ear if I needed to talk.  They didn’t have the “sage” advice that I needed from older men, sometimes even offered stupid advice to me.  But they cared and I knew it.  They were going to be my friend through thick and thin.  They were there for me at a most important time and I made it through that time because of them.

We need our friends.  Don’t shy away from telling them about your troubles when you hit a low spot.  Turn to them for strength.  It may not be their words of wisdom that push you through – leave that to the shrinks, philosophers, and preachers.  But your friends will give you that powerful something that is hard to put into words – unless you call it love and that love will raise you up.

Circle up at center of field for the Deck Of Cards

Side crunches x10 each side

Run across parking lot. Do 2 Burpees every line (roughly 10 lines)

run up baby hill and around the loop

???? Can’t remember the last exercise until time
COUNT-OFF & NAME-O-RAMA
35 Strong men
CIRCLE OF TRUST/BOM:
It’s hard to believe God is there in the middle of the valley. It’s easier to believe it when I am on the mountain top. But the truth is that God is with us on the mountain top and in the valley. Even though I don’t feel or see or experience God walking with me – it doesn’t mean He isn’t there. I have to hold fast to that anchor when I get overwhelmed. That’s my challenge to myself and to you: Believe He is there even if it seems that He isn’t.
MOLESKIN:

I’m preparing a swim lesson plan for those who are interested in learning to swim. It will be free of charge to the men of F3. Contact me on GroupMe if you are interested.

40 Strong and 1 FNG take the day start the day off right at the Asylum! 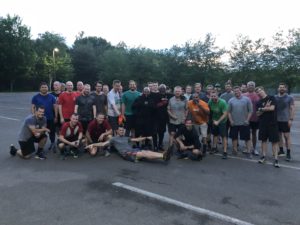 Empathy
1- Considering that someone has a life outside of the situation
2-Everyone is right. if you understood what the other person wants and why they want it you would likely want it too.

THE SCENE: Perfect day for a beat down
F3 WELCOME & DISCLAIMER
WARM-O-RAMA

THA-THANG:
Umbro took some PAX for his Q and Compost’s group did:

Sprint between each cone

Carry your buddy around the track (75meters)

5 dips at the pavilon

Bear crawl to AO. Run to top of Baby Hill

MARY:
NA
COUNT-OFF & NAME-O-RAMA
23 PAX killed it this morning
CIRCLE OF TRUST/BOM:
Share your wisdom with others. You have real knowledge to pass down to the next generation. Not knowledge about the latest sports stats or other “junk” knowledge – but knowledge on how to love our wives well, or how a child can understand their identity in Christ as a boy or girl. We need to understand how to reach the heart.
MOLESKIN:
Prayers for G6 and Rascal’s friends who are struggling with cancer.
ANNOUNCEMENTS:
None