MARY:
LBCs for time.
COUNT-OFF & NAME-O-RAMA
14 HIMs
CIRCLE OF TRUST/BOM:
Hope everyone had a good 4th and spent a little time being grateful for our country, our freedom, our families and friends.
MOLESKIN:
I don’t think anyone got to lunges. That was the most mileage and calories burned I’ve ever gotten in 45 minutes.
ANNOUNCEMENTS:

MARY:
20 BBS and a 6 inch leg hold for 40 seconds to finish it off.
COUNT-OFF & NAME-O-RAMA
16 Men getting it done
CIRCLE OF TRUST/BOM:
But he said to me, “My grace is sufficient for you, for my power is made perfect in weakness.” Therefore I will boast all the more gladly about my weaknesses, so that Christ’s power may rest on me.

Run down to the troll bridge and do 2 Burpees

Rules to teach your son 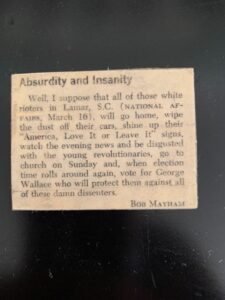 AMRAP:  8 Minutes Each Round/1 Minute rest

Mosey back to the Grinder

COUNT-OFF & NAME-O-RAMA
Total of 21 including two young sons (Coconut and Nightmare) of 3 Rivers and FNG Palmetto (Darren Macy)
CIRCLE OF TRUST/BOM:
There was a lot of turbulence in the 1960’s.  They were marked by assassinations, a nuclear war threat, the Vietnam War, war protests, racial tensions, and a growing drug culture. I entered high school in 1966 into a newly expanded, air conditioned building in a small town 45 miles southeast of Houston, TX.  Lamar Consolidated High School was being integrated with the closing of A. W. Jackson, an African-American only high school.  With a student population of almost 2,000, things went very smoothly from my teenage perspective.

We are presently in a period that has some resemblances to the 1960’s when it comes to racial tensions.  In the 50 years since my graduation from high school, there have been far too many incidences that remind me of the deep rooted inequality and prejudices that still exist in our country.  Each time these incidences occur and at various other times I pull out a small clip from my wallet.  It is from March of 1970 and it has been in all of the wallets I have owned over the past 50 years.  It is a short letter to the editor of Newsweek magazine. It is titled, Absurdity and Insanity:

Well, I suppose that all of those white rioters in Lamar, S.C. (NATIONAL AFFAIRS, March 16), will go home, wipe the dust off their cars, shine up their “America, Love It or Leave It” signs, watch the evening news and be disgusted with the young revolutionaries, go to church on Sunday and, when election time rolls around again, vote for George Wallace who will protect them against all of these damn dissenters.         BOB MAYHAM

Given the events around the death of George Floyd, I decided to do a little research about the Lamar SC Riots and came upon an article about some of the black students riding the buses the day two of the buses were overturned by white rioters.  The article concerned a 50th anniversary gathering of several students.  Mary Timmons was 16 years old at the time and was in one of four buses stopped.  Hers was not overturned but I can only imagine the fear she must have felt.  A quick search on Facebook and I sent her a photo of the Newsweek clip and a personal note on Facebook Messenger.  I wrote on May 28th:

Dr Timmons.   I was reading about the terrible tragedy in Minneapolis with the merciless death of George Floyd. Similar travesties happens far, far too often. Each time I pull out this little short letter to the Newsweek editor from March 1970. I have carried it in my billfold since my senior year in high school, 50 years ago.  I was sharing this clip with a Facebook friend and giving her some background about it. Today in a Google search about the Lamar Riot I came across an article with your name in it. I thought I would share it with you. Much has happened in the past 50 years. Progress has been made but the rate of change has not been fast enough. You obviously endured great pain 50 years ago. May God’s grace continue to engulf you and help you be a light to others.

It wasn’t until June 8th that I receive the following:

Thank you so much Bob.

We never know whose lives we touch as we going through. God always has a purpose beyond our imagination. What we go through is not about us, but to help strengthen others during their time. I am so happy to be a witness in this hour we are in. I never thought fifty years later we would be facing the world of change. What is so beautiful is we have the world standing with us.

I was touched by her words.  Perhaps this time around we will get it right as a society, as a country, as incredibly blessed creatures of a loving God.

THE SCENE: Mid 60’s and humid
F3 WELCOME & DISCLAIMER
WARM-O-RAMA:
SSH x 20
Arm circles x 10 each way
Hillbillies x 10
Burpees x 5
Lunges x 5
Merkins x 5
BBS x 5
Squats x 5
THA-THANG:
Drop BOMBS on this side the park.
5 targets on the loop. Run and drop BOMBS. Run and drop BOMBS. Etc.
B Burpee 10
O Lunges 15
M Merkins 20
B BBS 25
S Squats 30
MARY:
B O M B S
COUNT-OFF & NAME-O-RAMA
14 including 2 FNGs Kipper and 3Rivers
CIRCLE OF TRUST/BOM:
The bombs in our lives fall on our heads and attempt to blow us to pieces. We here at the Bomb Shelter have an circle of protection from the destruction. Through our bond of sweat and pain we support each man and lift them out of the ashes when it all becomes too much.
MOLESKIN:
Fun!
ANNOUNCEMENTS: