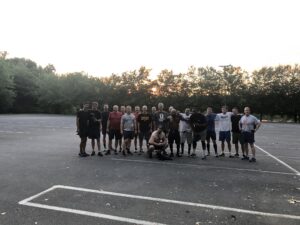 With 6 minuets left PAX chose to pick out all the face cards(25’s and 100’s) and perform exercises(vs man makers for every card left.

MARY:
Insert information about any additional post-THANG work (if applicable).
COUNT-OFF & NAME-O-RAMA
21 pax welcome Tinker from out of town
CIRCLE OF TRUST/BOM:
Find success in failure- example from 2 Timothy:  Paul and Barnabas took young Mark with them on a missionary trip, but he returned home before the end of the trip for reasons not revealed in Scripture.  Whatever Marks reasons, Paul apparently thought they were unjustified since he refused to take Mark along on a subsequent tips(Acts 15:38).

But did that make him a permanent failure?  Apparently not, for the same apostle Paul who was so disappointed in Mark counted him a valuable coworker in ministry later in his life.  This is a perfect example of how to succeed at failing; fall, get up, and continue on.  The next time you fail, make sure it is a temporary experience, not a permanent label.

Don’t get failing and failure confused.  Failing is nothing more than the back door to success.

THE SCENE: The Asylum, breezy and warm 71degrees
F3 WELCOME & DISCLAIMER
WARM-O-RAMA:
Took a mosey tour of the course
THA-THANG:
Pair I and do as many laps around course as possible until time is called.O do as many laps as possible in 45 minutes (took off a couple stations above for time)

MARY:
Flutters till everyone got back to AO., box cutters x26, planks with leg lifts, LBCs.

COUNT-OFF & NAME-O-RAMA
25 in attendance, rooney and mater there but not tagged in system
CIRCLE OF TRUST/BOM:
We talked about the Hardship Hill race and how it is important for us to serve our veterans and be a part of this great opportunity.

I gave an example of a African minister who was able to grow his church to huge numbers.  When American missionaries came to help they were astonished on how many people were coming to Christ through his church. They asked him how he was able to draw in so many people, he replied by saying that in America people study God‘s word and Bible studies at church and other areas, here they live in God’s word by serving others and people see that and want to be a part of a movement.  Then they study. We have it backwards here. We need to serve others and live for Christ not just study his Word.
MOLESKIN:
This old man was paired up with a 16 yr old cross country athlete (Jenny) . Good motivation for me to keep going. I heard lots of encouragement this morning to others.
ANNOUNCEMENTS:
HHOCR

Mosey down to new lots.

Mosey back to AO

COUNT-OFF & NAME-O-RAMA
CIRCLE OF TRUST/BOM:
Discussed Jim Collins 20 mile march concept. Choose a goal and consistently move toward it instead of balls to the wall on good days and no movement at all on bad days. Apply this to the push-up/sit-up charity challenge and don’t get behind.  https://www.artofmanliness.com/articles/whats-your-20-mile-march/

THE SCENE: It was a Balmy 16 Degrees.
F3 WELCOME & DISCLAIMER
WARM-O-RAMA:

Moseyed to the oval parking lot for some laps. 4 stops along each loop, each with an assigned exercise. Complete 20 reps of each exercise, then run to the next stop.

Rinse and repeat. We managed 9 total laps, so completed each of the exercises 3 times.

MARY:
No time for Mary

It seems like the last few weeks have been filled with story after story of tragic accidents and loss of life. It’s easy to get caught up in our own lives and worry about the “stresses of tomorrow” – discounting the blessings of today by worrying about what we may face tomorrow. However, we aren’t guaranteed tomorrow. Worrying about tomorrow doesn’t take away those troubles; it simply steals the joy from today.

I’m terrible about taking today for granted and worrying about what tomorrow may bring. It’s usually when I’m confronted with a story about tragic loss of life that makes me momentarily realize how precious today really is. I use the word “momentarily” because it typically lasts for a day or so and then I’m right back to worrying about tomorrow.

Let’s celebrate the blessings of today.