THE SCENE: Cloudy, mid thirties.
F3 WELCOME & DISCLAIMER
WARM-O-RAMA:
25 Side Straddle Hops.  10 Burpees. 10 Iron Mikes.  10 Windmills.  10 Cherry Pickers.  7 Baby Arm Circles Forward and Backward.  7 Wide Arm Circles Forward and Backward.
THA-THANG:
Mosey to Stop Sign at Northeastern Corner of Admin Bldg.  We will have cones posted along the road that semicircles around the Admin Bldg.  Each cone will give directions regarding exercises and how to get to the next cone.

Mosey back to stop sign at Northeastern Corner of Admin Bldg., picking up cones and signs along the way.  We will squat for one minute to quietly contemplate the beauty of the scenery toward the lake.

Mosey to CMU pile.  Men will split into pairs.  One partner from each pair will grab a CMU.  We will do Doras with partner one sprinting to other end of parking lot, doing 10 shin lifts, and sprinting back while partner two starts working on the exercises.  Partners will then switch positions.  These are the exercises that each pair will accomplish:

Mosey through entrance way gate to northern ball fields.  We will go the ball field that is closest to the entryway and congregate at one end of the marked soccer field in the outfield.  We will throw frisbee three times and race to the frisbee.  We will then race to end of the soccer field and back.  Those men who got the frisbee on the three prior throws will be competing to see who gets a free breakfast from the Q leader. Next, we will split into two teams.  Men will split up to play frisbee football.  Every time the frisbee hits the ground, not only does the possession of the frisbee change to the other team but all team members must do five burpees.  I must give my brother, Waffle House, credit for being the originator of this frisbee/burpee rule.

MARY:
20 Flutter Kicks, Boat Canoe.
COUNT-OFF & NAME-O-RAMA
Seventeen men with one FNG, a friend of Toto’s named Marty Mason.  His F3 name is now Tinder.
CIRCLE OF TRUST/BOM:
“When the perishable has been clothed with the imperishable, and the mortal with immortality, then the saying that is written will come true: ‘Death has been swallowed up in victory.’ ‘Where, O death, is your victory? Where, O death, is your sting?’” (1 Corinthians 15:54-55)

Edward Abbey was a park ranger and writer.  As a park ranger for the National Park Service he worked in scarcely populated desert areas of Utah, including the Arches National Park and Canyonlands of Southeastern Utah.  In his book Desert Solitaire, he speaks in one chapter about being alone in a very rocky canyon area in Utah.  Although an experienced ranger, he got lost and was stuck on a rock precipice.  He could make a jump across the precipice to a cliff similar in height but which was in the direction he knew would get him home.  He didn’t know how to get back the way he came even though he had tried to track it.  He was running out of water.  His choice was to either die of thirst where he was or make a huge leap from the precipice to the cliff.  The fall if he failed to reach the cliff would be hundreds of feet and would certainly bring him to his death.  He made the choice to jump and, for some good minutes, started thinking about his life before he made the jump.

What would you think about if you were faced with such a situation?  You are about to make the jump that will either continue or end your life?  What thoughts run through your mind.  Would you think about family?  About things that brought you joy?  Actions or lack of action that you regretted?  Would you wish you could say or do some things you had not yet done in life?  Would you have faith that God would follow you through death if death were to occur?  And, on the chance that you might make the jump, would you see life in a different way afterwards?  Would there be things that you would want to accomplish or do that you had yet to attempt?

Abbey gave a very poignant description of his fear and grief before making the jump.  As a man who loved nature, he thought with appreciation yet longing about the beauty of the world all around him before making the death jump.  Obviously, he made it to the other side as he later wrote the book.

As a man I would have been very scared, just as Abbey was.  As a Christian, I hope I would take comfort in verses like the one in Corinthians above.  I hope I would appreciate my mortality and the gift that God has given us in our short lives here on Earth.  But, I also hope I would realize that my perishable body has been clothed with the imperishable armor of God, that my mortality has become immortality through Him.  Then, even knowing I might fall to my death, I could say, “Death, where is your victory, where is your sting?”

MOLESKIN:
Prayers for Pele’s shoulder as he took a mean fall and hurt it during the frisbee football game.  Pusher, a physical therapist, said he didn’t dislocate.  Prayers for our brother, Pinto, who is suffering through treatment of multiple myeloma cancer.
ANNOUNCEMENTS:
New pull up bars that we raised money for will be going up.  We will have an AO launch in Morristown on April 4.

Arrive at Soccer Field. Perform directed exercise/reps at one end, mosey to other end, repeat, mosey back and repeat, until 5 rounds of the exercise/reps are complete. We did Burpees x10, Jump Squats x20, Merkins x20, Monkey Humpers x30.

Mosey to Playground. Perform Grinder of 5 pull-ups, 10 Merkins, 15 Dips – Mosey short distance and do 2 8ct BBs, Mosey back and repeat until time called. 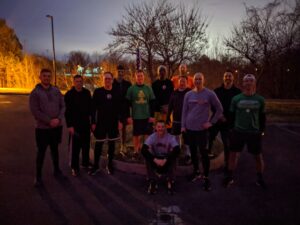 CIRCLE OF TRUST/BOM:
See Weekly Email (01/19). Spoke about the importance of cultivating the virtue of gentleness and the stumbling block that can hinder our gospel witness if we lack gentleness. “Blessed are the meek. They shall inherit the earth.”
MOLESKIN:
Some of my favorite HIMs showed up for this one, to include Toto. What a blessing it was to lead and fellowship with these men. Awesome group.
ANNOUNCEMENTS:
N/A

Repeat once. Mosey to coupon pile.

Mosey to the center of campus. Perform one of these exercises and then run a lap around the courtyard. Repeat for all three.

MARY:
Started side chrunches
COUNT-OFF & NAME-O-RAMA
21 HIMs today at JUCO!
CIRCLE OF TRUST/BOM:
James 4:14 – “your life is but a vapor”

Don’t waste your time. Use every moment and enjoy it while you have it. You never know when it will vanish. Don’t wish for the future, but enjoy the now.
MOLESKIN:
Unfortunately, our Mary got short today when 5k’s shoulder popped out of socket. Ouch! Thankfully, it came back in without any additional force.
ANNOUNCEMENTS:
TTTP on September 14th

THE SCENE: Hot…Humid…Miserable…Perfect for a beatdown
F3 WELCOME & DISCLAIMER Done
WARM-O-RAMA:
10xCherry Pickers, 20xlbac forward/backwards, 5 Burpees OYO  Short and sweet
THA-THANG:
Mosey to the hill above the large SE parking lot for some 11’s with Star Jumps at the top of the hill and diamond merkins at the bottom.

Now that we’re nice and warmed up, we moseyed to the pond parking lot to start the burpee mile.

Perform 12 burpees and run one lap around the pond. Repeat 4x

YHC failed to mention to the PAX that the pond loop is actually .44 miles. Total distance run is 1.76 miles with 48 burpees.

MARY:
Judge led somewhere around 1,000 flutter kicks while the six arrived from the final lap. Reverse indian run back to the shovel flag. The PAX formed two lines, first HIM in each line counts to five before dropping to the side for 5 merkins then popping up and joining the back of the line.

COUNT-OFF & NAME-O-RAMA
23 HIMs met in the gloom to kick off the week at JUCO. We had two more FNGs today. Welcome Kevin Hanson (Sergeant Slaughter) and Woody Huguley (Bambi)!
CIRCLE OF TRUST/BOM:
Even Jesus, being perfect in every way, faced rejection multiple times throughout his time on Earth. His reaction was always to continue soldiering on in the work of the Lord. We will all face rejection at some point in our lives. How we react to that rejection is what matters. Be like Christ and use rejection as a teaching moment and continue doing God’s work.

There must be something in the water here at JUCO as we have grown our numbers exponentially in the last month. Let’s keep this ball rolling! Keep inviting FNGs to come out and get better. Reach out to those HIMs who have been absent and encourage them.

ANNOUNCEMENTS:
A JUCO shirt order should be posted in the GroupMe soon. Shirts are only ordered in bulk, so if you want one, get on it.

Bear crawl across the end of the lot

Repeat lunges for 3 spaces, 50 calf raises and decrease by 5 each time.

Inch worm merkins across the end of the lot