(mosey to the flagpole down from the AO)

(Battle buddy it up)

(mosey to parking lot outside of playground)

(Mosey to hill outside of AO parking lot)

“Then David said to Solomon his son, “Be strong and courageous and do it. Do not be afraid and do not be dismayed, for the Lord God, even my God, is with you. He will not leave you or forsake you, until all the work for the service of the house of the Lord is finished.”” – 1 Chronicles 28:20 (ESV)

This comes from a daily email I get from The Knights of the 21st Century (check it out ^^). Daily motivation and spiritual guidance for men wanting be men of impact, for their families, their work, and themselves. As a young man, I tend to forget to be strong and brave and have courage – both when and not when the odds are stacked up. I’ve included the email below, take a look and be encouraged men of impact!

THA-THANG:
Grab a CMU and head to the Pavilion for “The Bo (Perfect 10) Derek”

“Perspective” – One word that can really provide you with peace of mind.
It is easy to get caught up in the day to day stress of home and work. Let’s say you just lost a contract you were really close to landing or maybe you lost a case you thought you had in the bag. Bunny is likely up a lot with a newborn or someone in this group might have a 3 year old who just decided to randomly turn over their cup of milk in the car…. The list can go on and on…. But the bottom line is, on the grand scale, in a global sense or even a biblical sense, these things are minor. The fact is every one of us here has got it pretty darn good. Keeping things in perspective helps us to remember that and focus on the positive. We’ve got food on our tables, roofs over our heads, wonderful families and friends. We’ve got this group of brothers who come together and support each other physically, socially and spiritually. We vacation, we go out to dinner, we go to the movies, we are free, etc. etc. Put into that context, the spilt milk is trivial.

When you think you are having a bad day, think globally. Think about the millions around the world (and those right here in East Tennessee) who don’t have what you have. Reflect on that a bit and put your troubles into perspective. It will make things a little brighter for you.

THE SCENE: Insert info about the weather, etc.

ALL THAT BEING SAID – LET’S GET TO WORK

(mosey to in front of Everest)

(American Indian Run back to AO)

TPQs (Thought-Provoking Questions) to On the Mosey Back to AO

(Arrive back at AO)

I recently went and saw the new Star Wars movie, once on a date and once by myself – loved it both times, would highly recommend. There were a couple quotes that I pulled out of the movie that really got me: 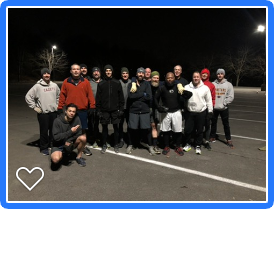 F3 New Year’s Party THIS Friday @ Tank’s House: “F3 Knoxville is having a New Years party…kind of. Bring the wife, girlfriend/significant other or even a FNG. It’s going to be a fun night of fellowship to celebrate the new year! What to bring: a few bucks for the game tournaments, a small dessert or appetizer and BYOB. Tea and coffee will be provided. Make the HC now and let your wife/sig other meet the other idiots that you workout with at 5:30am!” @ 7pm at

THE SCENE: Clear and Sub-zero (for those who understand Celsius)

Mosey down to the Pavilion for some 11’s (Table Rows with a jog over to the cloud for Box Jumps/Step Ups); LBC’s while we waited for 6 to roll up.  Great mumble chatter turned to cold huffing and puffing quickly.

Mosey back up the hill to the CMU station to distribute the goods.  Spread out on baseline near ball field with battle buddies to embark on a Brick Relay (in the absence of @Bunny… “it was a race!”).  HIM1 carried 2 CMU’s as fast as possible across lot to other baseline while HIM2 planked with anticipation.  HIM1 sprinted back to relieve HIM2.  HIM2 sprinted to other side to retrieve both CMU’s and return them to original baseline.  Rinse and repeat 3 more times (round 2 SSH for waiting HIM; round 3 squats; round 4 plank). LBC’s while we waited for 6 to roll up.

After brief recovery… Brick Brigade along baseline starting in CMU station corner.  5 CMU’s were passed down the line with an overhead press during each handoff to the next HIM.  Indian run to the front of the line where each HIM added 10 Merkins before joining the rest of the waiting PAX in squats.  Made it all the way across the lot to claim Victory for a brief recovery.  Repeated back across the lot for a second round.  Changed out squats for SSH’s for waiting PAX.

After stowing the CMU’s in their natural habitat… mosey over to far corner for some flutter kicks on 4ct (IC); Detecting @Coolio spying his watch, steered PAX on mosey past AO (leading him to think COT must be close) and headed up Baby Cardiac Hill for a Burpee at the top; mosey back to AO for fake wrap up with some Mary time.  Pushed through 30 American Hammers (IC) led by @Coolio followed by 15 Hello Dolly’s on 4ct (IC).

MARY:
COUNT-OFF & NAME-O-RAMA
CIRCLE OF TRUST/BOM:
Luke 2:11 “For unto you is born this day in the city of David a Savior, who is Christ the Lord.”

In the middle of their mundane, the shepherds had a divine interruption of good news.  The announcement of Jesus birth was not only a miraculous moment but the culmination of something planned for hundreds of years (see Isaiah 53).  Jesus came not just to be a carpenter or an inspirational leader, but He came to die in our place.  He came to be our Savior.  Philippians 2 speaks of His step out of divinity into humanity with humility.

Finished with a reminder of a very familiar verse and it’s lesser known neighbor… John 3:16 “For God so loved the world, that He gave his only Son, that whoever believes in Him may have eternal life.”  But keep on reading… John 3:17 “For God did not send his Son into the world to condemn the world, but in order that the world might be saved through Him.”

MOLESKIN:
This was my VQ!

ANNOUNCEMENTS:
Important reminder to always keep a cell phone with the PAX during workouts in case of medical emergency.  (followed by wise-cracks from @Coolio toward HIMs deserving of RESPECT)

THE SCENE: Unseasonably warm!
F3 WELCOME & DISCLAIMER: Maybe?  Code Brown was in charge of that and perhaps skipped over some of it.  No FNGs so we’d heard it all.
WARM-O-RAMA:
SSH IC; practice some Manmakers and a Fireman Carry.  Wish Hot Tub and Gibbler well as they took off like scalded dogs to do a little marathon training tour of the Asylum.  Let’s move.
THA-THANG:
4 volunteers strap in the harness to pull the Yule Log to Circus Maximus.  We use a rotation of volunteers to pull the Yule Log a half lap around at a time, at each stop, we celebrate the Days of Christmas cumulatively as follows:

Bunny takes over and whips us like mules up Baby Everest.  Our distance runners rejoined the PAX and took a turn pulling the Yule Log up.  Manmakers at the top:  Rinse and repeat.

MARY:
Somebody put Cat Gut in charge for a brutal 5 minutes of Boat/Canoe.
COUNT-OFF & NAME-O-RAMA

CIRCLE OF TRUST/BOM:
Christmas isn’t about bright presents in flashy wrapping.  God’s ultimate gift of love and grace through his Son came in very humble wrapping.  With that in mind, we should be able to celebrate Christmas in any situation.  Also, this day in history:  The counter-offensive known as the Battle of the Bulge began in the Ardennes Forest.  Those involved certainly spent Christmas without anything fancy or shiny.
MOLESKIN:
Prayers for Pinto and his family and Junk, Junk’s wife, and their family.
ANNOUNCEMENTS:
Second F gathering at Tank’s house on Jan 3.  M’s are invited.